Get fresh music recommendations delivered to your inbox every Friday.
We've updated our Terms of Use. You can review the changes here.

Tunes in the Church

by Tunes in the Church 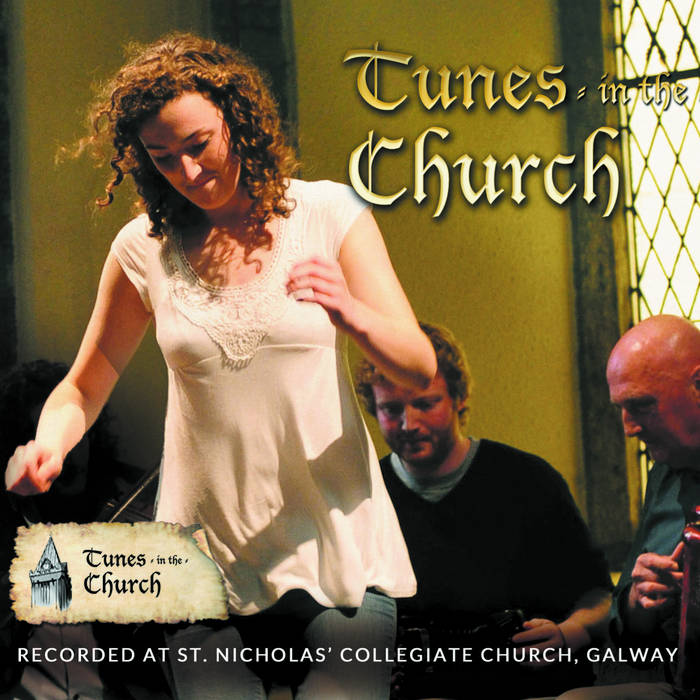 The signature characteristic of “Tunes in the Church” concerts is an acoustic, authentic, personal and interactive representation of Irish music, song and dance. Interactive involvement between the audience and the performers is central to the experience. Relaxed, natural, conversational communication during the concerts lowers the typical barrier between the ‘audience’ and ‘performer’, thereby making each concert unique, fresh, and singularly authentic. Further, by challenging the concept that the home of Irish music is a pub setting, this concert series provides an exceptionally respectful but family friendly setting for the listener and creates a platform upon which leading exponents of traditional music can showcase their fine talents.

‘Tunes in the Church’ began during the summer of 2010 with the purpose of setting the standard for the presentation of live traditional Irish music in Ireland. Over the summer months since then, concerts have featured both established and less well-known musicians, young and old, from all over Ireland.

The concert series was established for the enjoyment of all who love or who wish to learn more about traditional Irish music. This inaugural recording reflects the musical quality that “Tunes in the Church” strives to express and is an
important component of the vision of making this original and unique concept an independent and self-sustainable venture. I’d like to extend a heart-felt thanks to all the musicians and friends who have so generously invested in this vision to date.

2: Song - The Bleacher Boy
Helen Diamond learnt her music from both sides of her very musical family. She began to sing and play the fiddle at a very young age and has a strong connection to both Donegal and Northern Ireland musical repertoires. This song was rediscovered by Morris Leyden and Helen learned it from the singing of the Northern Ireland singer, Róisín White.

3: Jigs - Bold Doherty’s/ P. Joe’s
Cormac and Clíodhna Begley are a brother and sister duet from the Gaeltacht of West Kerry. They’ve grown up with music from both sides of the family and learning initially from their father Brendan. Cormac and Cliodhna share a distinctive style, strongly but not solely influenced by musicians and by the musical styles of West Kerry and East Clare. Here they play two jigs, the first, a tune-version of the song ‘Bold Doherty’s’ and the second, a tune they associate with concertina-player Mary MacNamara and East Clare.

4: Jigs - Micky Callaghan’s/ Seargeant Early’s Jig
Cormac Cannon began learning the whistle from Mary Bergin at an early age. He took up the pipes some years later, learning initially from Tommy Keane and later from other prominent players during regular visits to the Willie Clancy Summer School. He has a keen interest in the music of the older pipers and fiddle players, particularly the music
of Clare and Kerry, and a preference for the sound of the flat-pitched pipes. Breda grew up on the shores of Lough Corrib in Claran, near Headford, Co. Galway. Also a student of Mary Bergin from the age of 7, Breda began learning the fiddle at school shortly afterwards. She got a new fiddle for her 13th birthday and soon became hooked! Her musical influences come predominantly from older players ranging from
Bobby Casey, Sarah & Rita Keane, Paddy Fahey, Paddy Canny, Joe Ryan, Patrick Kelly to Willie Clancy and Felix Doran. Cormac and Breda learnt the first jig from the great fiddler, Patrick Kelly from Cree, Co. Clare, and the second tune from the great Willie Clancy.

5: Song - An raibh tú ar an gCarraig
Brendan and Breanainn Begley, singing and playing here as a father a son duet, come from the Dingle Peninsula, Co. Kerry. Brendan is a singer and accordion player of some renown and Bréanainn, his eldest son, is a highly versatile guitarist. Both play music in the ‘West Kerry style’. ‘An raibh tú ar an gCarraig’, written by the poet, O’Mongáin, is
said to have been written during the time of the highly repressive “Penal Laws” period in Irish history.

6: Barndances - Jemmy Duffy’s Barndances
Gary Hastings is an Archdeacon in the Church of Ireland, at present Rector of Galway. He is a fluent Irish speaker and well known traditional fluteplayer. Originally from Belfast, he was fortunate to learn much of his music in Fermanagh from the likes of Cathal McConnell and an older generation of living tradition bearers like Eddie Duffy
and Mick Hoy from Co. Fermanagh. Gary learnt these barndances from Fr. Séamus Quinn.

7: Jigs - Apples in Winter / Gillan’s Apples
Jack Talty is a concertina and piano player from Lissycasey in Co. Clare. Jack has contributed to a considerable number of albums to date, as a musician, engineer, composer, producer and arranger (he also recorded this CD!). Áine Bird from Tara, Co. Meath, learned fiddle from Antóin Mac Gabhann and was also influenced by flute player Catherine Mc Evoy. Áine is a former Oireachtas fiddle champion, and was a member of the band Cruinniú. This particular version of Apples in Winter is similar to a setting played by West Clare concertina players Tom Carey and Solus Lillis. The two-part version of Gillan’s Apples that follows was played by the great fiddler Patrick Kelly, of Cree, Co. Clare.

8: Song - Béal an Átha Buí
Saileog Ní Cheannabháin is a native Irish speaker, whose singing style is mainly influenced by singers from Iorras Aithneach, Connemara. Also a highly tasteful and accomplished traditional musician on fiddle, piano and viola, Saileog plays classical music on piano. ‘Béal an Átha Buí’ is an evocative love song that originates from North Co. Mayo, that was composed in the eighteenth or nineteenth century.

9: Double Jig/Slip Jig - The Kilclogher Jig & Elizabeth Kelly’s Delight
Tommy Keane (uilleann pipes) and Jacqueline McCarthy (concertina) have been playing music together since they met in London in 1980. In 1987 they moved to Co. Galway where they play and teach traditional music. Their daughter Siobhán (featured here on fiddle) also plays piano and teaches traditional music. These tunes are from the playing of fiddle and concertina player John Kelly from Kilballyowen in South Clare. John had a great collection of unique tunes in his repertoire. Kilclogher is to the west of Kilballyowen on the Loop Head Peninsula and Elizabeth Kelly’s Delight is named after his mother who played concertina. John Kelly can be heard playing these tunes on fiddle on an LP recording, “Ceol an Chláir” (1978).

10: Reels - Ships’ a Sailing / Jackson’s / Dunmore Lass es
In an unusual pairing of instruments, Páraic Mac Donnchadha on banjo and Cormac Begley on concertina play three popular session reels, ‘Ships’ a Sailing, Jackson’s, and Dunmore Lasses.’ Páraic comes from Ahascragh, East Galway, where his parents, sean-nós singer “the Master” Seán ‘Ac Dhonncha and ‘the Landlady” Bríd over many years
played host to musicians and singers at all hours of the morning. Páraic only began learning banjo in his College years but was hugely influenced by the playing of Paddy Fahy, Conor Tully and Paddy Carty. Cormac and Páraic began playing together in 2012 at the Feakle Festival, Co. Clare. On this, their first recording together, the instruments are tuned to the old concert pitch heard in the 1870s, somewhere sharp of B flat but lower than B.

11: Reels - O’Sullivan’s March / Lanigan’s Ot her Ball
Marie and Tim McHugh are a fiddle and flute playing sister and brother from Newport in Co. Mayo. They started off learning music from family and local music teachers John Hoban and Marion McCarthy and later from musicians locally and at sessions throughout the country. As well as local musical influences like the Langans and accordion player Seamus Heneghan, both are strongly influenced by Connaught flute
and fiddle music, in particular the playing of Jimmy Murphy the east Mayo fiddle player. In 2012, Tim was awarded the prestigious Sean O’Riada award for his flute playing. The first tune is a less common setting of a well known jig and march by the same name. The
second, learned from Rev. Gary Hastings is a version of the well known song “Lanigan’s Ball” from the playing of the great Fermanagh flute player, Eddie Duffy.

12: Slow Air - Caoineadh Uí Néill
Pádraic is son of Tommy Keane and Jacqueline McCarthy. In 2011 he was awarded Gradam Ceoil TG4 - Ceoltóir Óg na Bliana. He has toured America (as soloist with The Irish Chamber Orchestra) performing Termon - a piece for uilleann pipes and strings
by Mícheál Ó Súilleabháin. He has also toured with Ragús and worked with Galway’s Irish language theatre group - An Taibhdhearc. He is featured on “The Rolling Wave” - a CD of young pipers issued by Na Píobairí Uilleann in 2012. This slow air, ‘Caoineadh Uí Néill’, seems to be unique to Sliabh Luachra, Co. Kerry and has been recorded by Denis
Murphy. It is becoming a favourite of uilleann pipers and Pádraic has been influenced by Dublin piper Peter Browne’s version.

13: Flings - Casey’s Favourites
Aidan Connolly is a fiddle player from Rathfarnham in Dublin and is a product of Craobh Naithí Branch of Comhaltas Ceoltóirí Éireann. His playing is influenced by a wide variety of fiddle players, including Paddy Cronin, Paddy Canny and Denis Murphy. Liam Mac Congáil is from Béal an Mhuirthead, Contae Mhaigh Eo. He cites Joe Cooley,
the great Galway box player as a major influence, but also owes much of his musical style to local Mayo musicians, having played, for example, with accordion player Joe Carey for many years. Both Aidan and Liam have recently graduated from St. Patrick’s College in Drumcondra, where they have been studying Primary School teaching
together. These flings, ‘Casey’s Favourites’ were learnt from a recording made by the Garryowen Irish Recording Orchestra in Philadelphia in the early 1950’s.

Cormac Begley is a bass, baritone, treble and piccolo concertina player from a west-Kerry musical family. He plays in a number of projects including: duets including Clíodhna Ní Bheaglaoich, Jack Talty, Caoimhín O Raghallaigh and Liam Ó Maonlaí; a trio entitle 'Concertina'; and with the band Ré.He is the founder of Airt and award winning Tunes in the Church live concert series in Galway & Dublin. ... more

Bandcamp Daily  your guide to the world of Bandcamp

Quelle Chris joins the show to discuss his most recent release, "DEATHFAME"